Everything Parents Need to Know About The Dangers of Teen Vaping

The act of vaping is similar to smoking, it involves inhaling and exhaling a liquid that is often referred to as “vapor”. Vaping was originally introduced as an aid for individuals who wanted to stop smoking cigarettes because they contain fewer chemicals than cigarettes. However, researchers at Yale all agree: vape devices have not been proven to help adult smokers quit smoking.

Since 2006, vaping has grown substantially in popularity, and while it is illegal for people under the age of 18 to own or use any type of vaping device, many teens own, borrow, and use them on a regular basis.

Devices used to vape include battery-powered e-cigarettes, vape pens, and “mods”. They are filled with a liquid, or “vapor”, that is commonly referred to as “juice”. This juice is largely unregulated, and in light of recent deaths and lung complications, the FDA has recently warned that everyone, not just youth and young adults, should avoid vaping until investigations and regulations can be put into place.

Why is it Dangerous?

Substance use of any kind is illegal and unacceptable for minors. It affects brain development, cognitive abilities, and can lead to mental health conditions and physical health problems later in life.

While vaping may seem like a harmless thing for teens to engage in, new information about the dangers of vaping, especially for teens, is being released every day. According to the Surgeon General, between 2011 and 2015, there was a dramatic 900% increase among high school students using vapes. 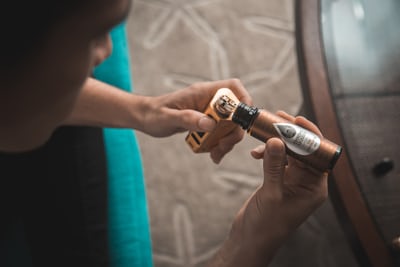 Here are some of the risks and downsides of vaping that we are currently aware of:

What do I do if my Teen is Vaping?

The first thing to do if you think your teen is vaping is to educate yourself. Learn about the health risks and the reasons that teens vape.

The most important thing to remember is that keeping an open dialogue with your teen about vaping is the only way you’ll be able to educate and inform them. Ask them questions about their experiences with vaping, if kids at school vape, and other leading questions.

Avoid confrontational methods of communication, and just try to be open with them about their potential use.

If you are concerned that your teen is struggling with nicotine or THC use or dependence, consider reaching out to our admissions line for advice.

Click here to read more about marijuana use in public schools